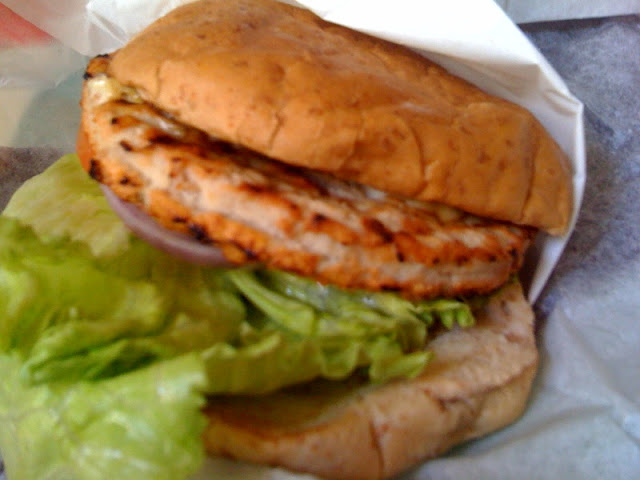 Teriyaki Turkey Burger at Carl's Jr.
carlsjr.com
F
Carl's Jr. food is terrible, but you gotta give it up for some of its recent commercials. No, not the Paris Hilton car wash one. That's terrible, too. I'm talking about the one where Carl's lays it down with "This is what we do, and that's the way it is." It's funny, it's bold (enough) and it's memorable, and if you have a problem with it, you're kinduva bitch-ass.

It's just too bad that Carl can't seem to make edible sandwiches. Their latest creation is a batch of shitty turkey burgers. Fully expecting a flavorless mystery-birdmeat disc, I ordered the burger that had the most crazy shit on it in: the Teriyaki turkey burg. It's drenched in sugary teriyaki glaze with Swiss cheese, onion, tomato, lettuce and a slice of grilled pineapple, all stacked on a honey-wheat bun. Motherfuckin' UGH. Couldn't eat it all. Usually you wouldn't complain about the meat in your burger being too big, but the cardbird patty is giant, mealy and has no taste to speak of. The sauce might as well have been maple syrup. Swiss cheese? Why?

You may have noticed that allsandwich is seeing quite a few less fast food entries these days. Shit like this is why. But go watch that Carl's commercial again, it's pretty cool. I like the part where Olivia Munn and Kareem Abdul-Jabbar are jetskiing.
Posted by brock at 4:07 PM