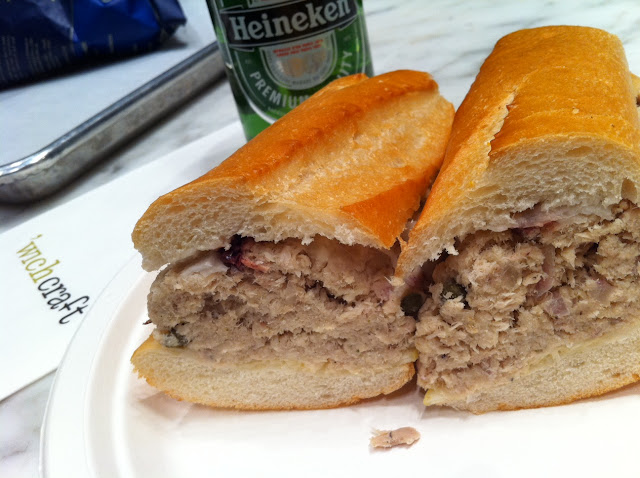 Sicilan Tuna at 'Wichcraft
mgmgrand.com
B-
A few words about 'Wichcraft: Yes, it is created by Tom Colicchio. Yes, it's a Vegas sandwich shop located on the Strip, way way back in the restaurant walk of the MGM Grand, near the pool. Yes, We had lunch there of two sandwiches, a bag of chips, a soda, a beer and a banana for $37. And yes, I felt compelled to revisit 'Wichcraft because I had heard and read some negative things, that it wasn't so great, that maybe the food there had fallen off.

I disagree with that last part. It may be a little spendy, but hey, that's the Strip for you. If you yanked this joint out of MGM and dropped into a Vegas suburb, all the people who say it's not good or it costs too much would be falling over themselves, blogging and Yelping and talking about how great this little gourmet sandwichery is, how the ingredients and breads are wonderful and rustic and innovative. It's a great little neighborhood sandwich shop, it just happens to be in a huge casino resort. Accept it.

This is the 'Wichcraft version of a tuna salad sandwich, way better than the average version. The fish is light, like fluffy cloud of oceanic deliciousness, and there's no sign of glop mixed into the meat to yuckify it. Just lots of tasty fish, a little fennel and olive relish dabbed here and there, with a thin spread of mayo and some sharp lemon on the bottom layer of a soft, chewy baguette. It's quite good, I just wish it had some greens to add a little healthy, vegetably crispness. But overall, this is good stuff, and emblematic of what you'll find at 'Wichcraft.
Posted by brock at 3:24 PM