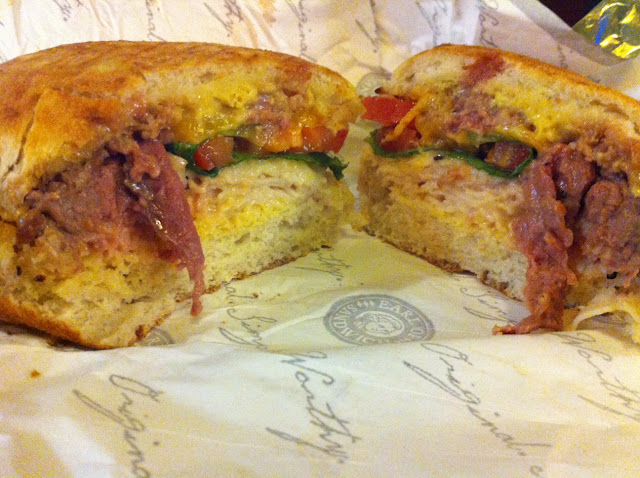 The Full Montagu at Earl of Sandwich
earlofsandwichusa.com
F
Rarely does a sandwich elicit anger, but ... fuck this place. Seriously. My first Earl of Sandwich experience was so miserable, I swore I'd never return. But they opened another one here in Vegas at the Palms, and I happened to be in the food court, and how bad could it be? Terribly, disgustingly bad. I encourage you to go to the Earl's website and look at their pic of this sandwich, and then compare it to the real thing above. I know, I know, this is never a fair comparison, but then again, when you spend your hard-earned bucks on a sandwich you don't expect the meat to be slimy. The Full Montagu—this name makes me even more angry since it bears the name of the man credited with inventing the sandwich—is supposed to be a tasty pile of roast beef, turkey, Swiss and cheddar cheeses, "the Earl's mustard sauce" plus lettuce and tomato. Somebody behind the counter clearly thought "the Earl's mustard sauce" was so good, they should drench both sides of this dry, dense, thick and crumbly roll with it. Well, it's not good. It's not good at all. It's abhorrent. And this sandwich is a mushy abomination. Fuck.