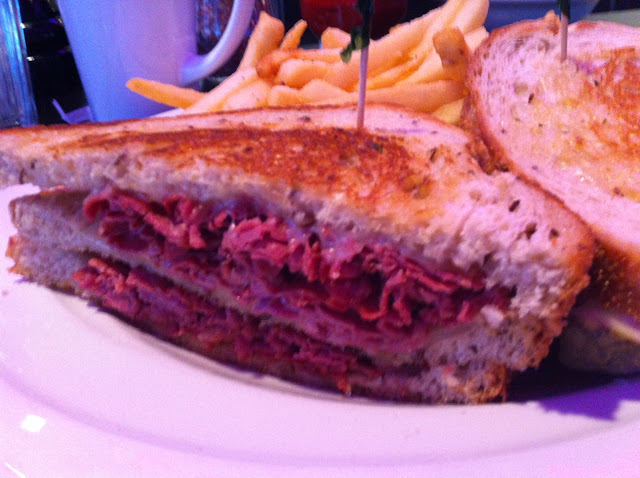 Hot Pastrami Deli-Style at the Peppermill
peppermilllasvegas.com
A-
So obviously I haven't been to all the delis in the world, or even all the big famous delis, or even all the delis in Vegas. But I've never been to a deli that puts an extra slice of bread in a hot pastrami sandwich. The Peppermill does it. I didn't think it was a good idea, but it worked. It took away from the meat-mountain effect that often occurs in piled-high deli sandwich construction, providing a nice crispy texture in every bite. The downside: the meat in this sandwich was stuffed into the middle, of course, making for an overabundance of bread in your face when you're eating around the outsides. Not a big problem, though, considering this toasty rye was grilled with lots of butter for guilty-pleasure, greasy goodness. The pastrami was sliced thin, lean, and tasty, and there was melty Swiss cheese and a few dabs of mustard-mayo sauce adding moisture and flavor. The Peppermill is fantastic place to eat a sandwich in Las Vegas; you should go and eat this one.