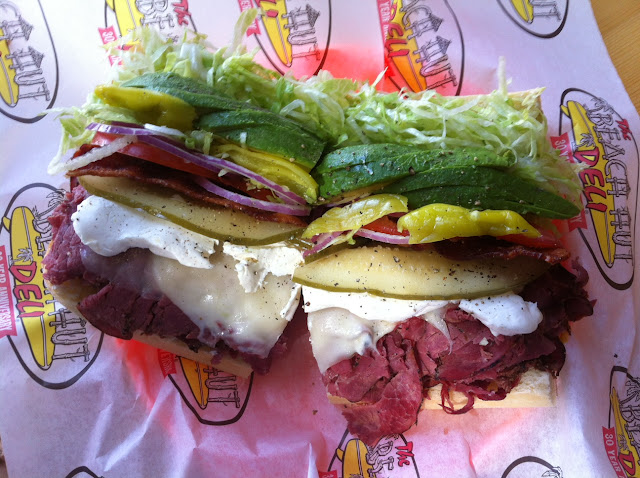 Santa Cruz at Beach Hut Deli
beachhutdeli.com
C
Beach Hut Deli, a franchise new to the Las Vega area, is kind of like Port of Subs did a bunch of steroids then smoked a huge joint. The sandwiches are gigantic, and while a huge sandwich is not inherently problematic, they are cramming way too much stuff onboard rather bland, dry hoagie rolls. Restraint is important when you're making food for people to eat, especially when you're trying to make exciting food that people will talk about and blog about and take Instagram pictures of and be hungry and come back for more. Be creative, try some wild combinations, but draw the line the somewhere or else you're gonna drop a monstrosity in which PASTRAMI AND CREAM CHEESE ARE ON THE SAME SANDWICH. (Capital letters indicate sandwich blasphemy, in case you hadn't noticed.) So this thing, the Santa Cruz, has those two unhappy partners, plus avocado, bacon, mayo, mustard, pickles, tomatoes, red onion, lettuce, peppers and more cheese, melted. I think it was provolone. I don't know. How can you keep track? Look at this photo: ridiculous. Now look at it and imagine it without the pastrami—which, by the way, was decent and there was a lot of it—melted cheese or pickles. All of a sudden you've got a killer BLT, no? I know there are those of you who see a sandwich like this and get excited. Keep it coming, you'll say. No, friend, that is not the way. Restraint is important.

Posted by brock at 9:59 PM No comments: Links to this post 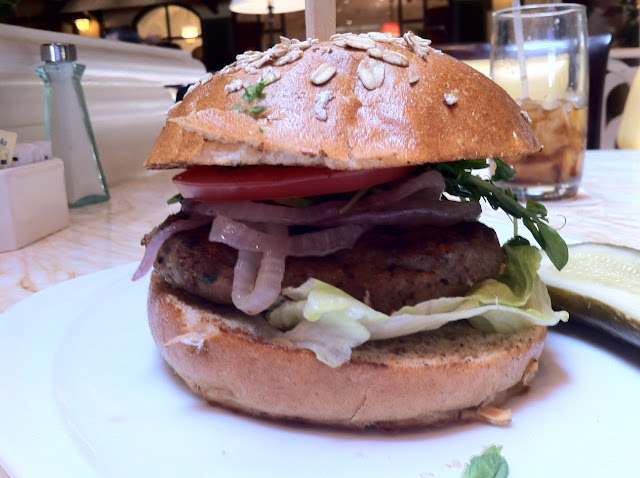 Turkey Burger at Terrace Pointe Cafe
wynnlasvegas.com
B
Ah, the turkey burger. The blandest burger you can order, right? For when you don't really want to enjoy your burger, the turkey burger. It's just the truth, people. So under what circumstances would we order one? Lunching alone at Wynn's lovely Terrace Pointe Cafe, of course. Turns out, it's a delicious choice. Maybe the best turkey burger ever. There was a savory outer crust on this turkey patty that is usually unattainable due to the fact that turkey is so lean. Leave it to casino coffee shop chefs to work some magic. Fancy toppings include avocado, lettuce, tomato, grilled onions and pea tendrils. The bread: a rather robust honey wheat bun. Next time we'll get the blackened blue cheese burger. You know, stop fucking around. No pea tendrils on that one.

Posted by brock at 9:41 PM No comments: Links to this post 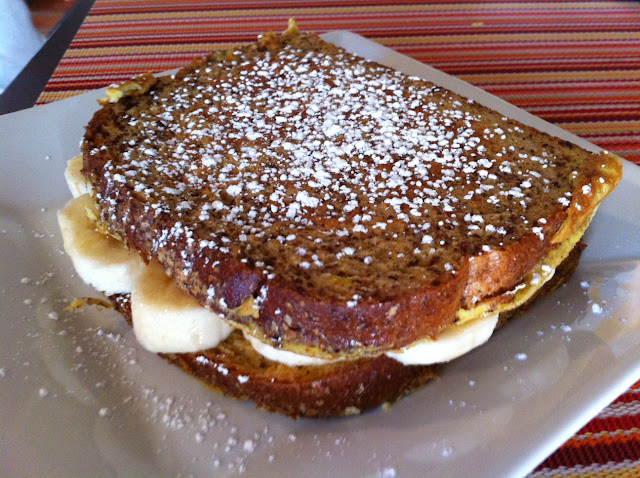 Banana French Toast
homemade
C
Look, it's a sandwich if we say it's a sandwich. Honey wheat bread griddled in cinnamon egg batter, sliced bananas and a drizzle of pomegranate honey inside. Damn ... forgot the peanut butter.

Posted by brock at 10:06 PM No comments: Links to this post 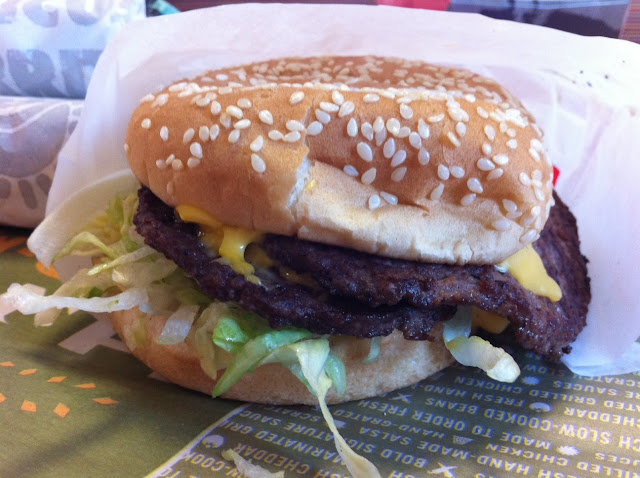 Double Del Cheeseburger at Del Taco
deltaco.com
D+
On one hand, there's a little voice inside us that thinks Del Taco deserves a little extra credit as the rare fast food franchise that combines fake Mexican food like tacos and burritos with traditional drive-thru eats like burgers, fries and shakes. On the other, there's the undeniable fact that while Del Taco does a lot of stuff, it doesn't do anything particularly well. The Double Del is Del Taco's version of the Big Mac or Double-Double in two ways: it offers standard toppings of two questionable beef patties, two slices of American cheeseness, tomato, lettuce, onions and "burger sauce" on a sesame seed bun; and secondly, it offers flavors that are similar to other burger chains while simultaneously tasting singularly like Del Taco. Only someone who has eaten too much fast food will understand what we're talking about. Should you eat this? No. Should you eat something else at Del Taco? Depends on what you were drinking and what time it is. 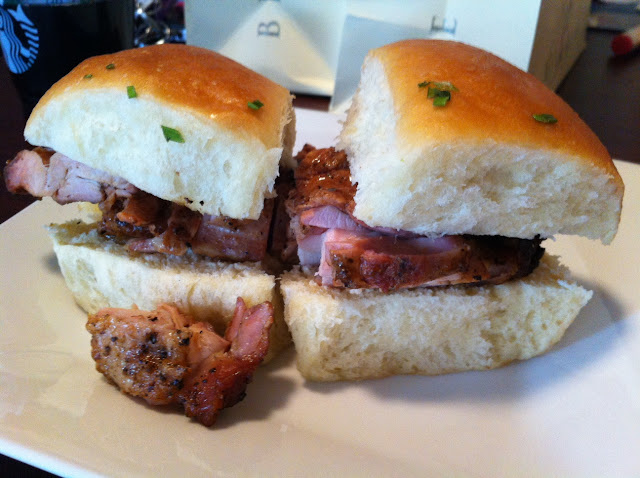 Chicken Parkers
homemade (sort of)
B+
Two ingredients and mighty tasty. You know that thing where you go out to dinner at a great Vegas steakhouse (in this case, Brand at Monte Carlo) and they give you a whole, fresh batch of Parker House rolls to take home with your leftovers? Yeah, well, it's cool when that happens.

Posted by brock at 10:05 PM No comments: Links to this post 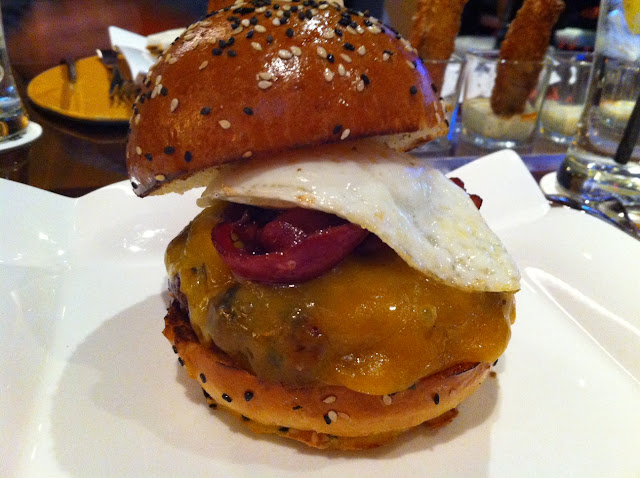 Farm Burger at Gordon Ramsay BurGR
gordonramsay.com
A
A super celebrity chef fancy burger joint! This would not usually excite us, but Gordo's spot at Planet Hollywood is putting it down. This is our favorite burger on the menu so far, topped simply and perfectly by English sharp cheddar cheese, duck breast bacon and a lovely fried egg. The beef is a wonderfully composed grind, fatty and juicy, and though we are getting a bit tired of sweet brioche buns for burgers, the goodies here are so savory that it's a nice counterpoint. This is an awesome burger. Look, people are going to complain about the prices and the service at a place like this. You just have to remember you're on the Vegas Strip. Take a bite and enjoy yourself, and if this isn't for you, head south to Fatburger and spend less for a lesser burger.

Posted by brock at 9:59 PM No comments: Links to this post 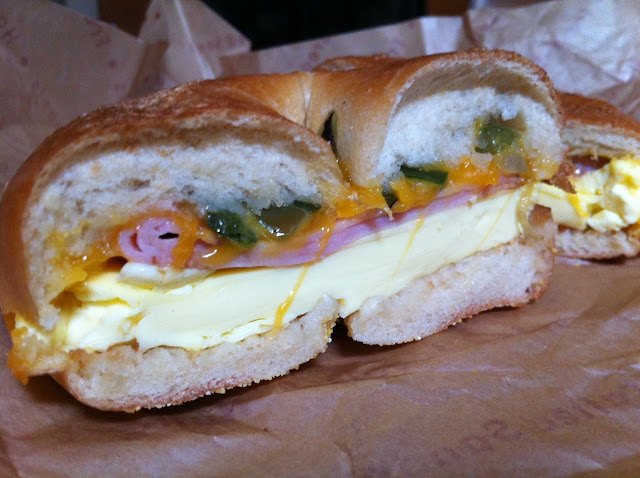 Denver Omelet at Einstein Bros Bagels
einsteinbros.com
C-
Apparently it wasn't enough for Einstein Bros to bastardize bagels, they had to go and fuck up omelets, too. I mean, really. Call it a Denver sandwich at least. Doesn't the stuff have to be mixed in with the eggs to even merit the word omelet? So maybe this is a deconstructed Denver, with slices of ham, cheddar-ish cheese and diced green bell peppers atop an unholy disc of egg (Is it scrambled? Fried? Why does it look like that? What color is that?) all piled into your choice of bagel. We went with plain. Call us boring. Whatever. It still beats a McMuffin.
Posted by brock at 9:49 PM No comments: Links to this post 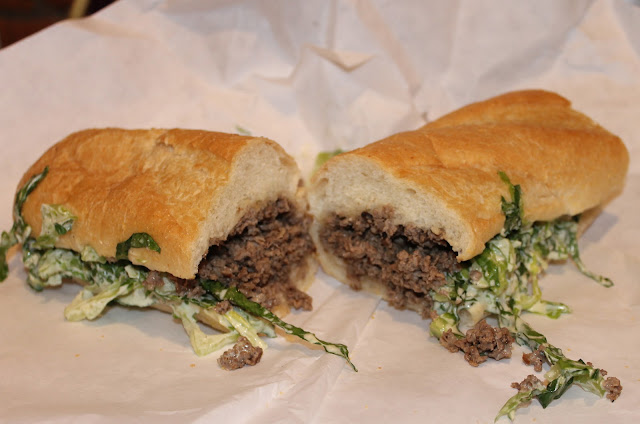 Caesar Steak at Those Guys Pies
thoseguyspies.com
B
This is one of the weirdest sandwiches we've ever eaten, but it was good enough that we'd like to try it again. This pizza shop also claims to specialize in cheesesteaks, but we just had to try this Caesar Steak,  chopped and griddled ribeye steak, ribbons of romaine in a creamy dressing and plenty of hard-to-see but easy-to-taste parmesan cheese. It tastes exactly like what you think it would, but the chewy-soft Italian roll elevates this sandwich, a super-delicious foundation with the perfect texture for these ingredients. We need to get back to Those Guys Pies and try their basic cheesesteak—expectations are high.
Posted by brock at 9:43 PM No comments: Links to this post 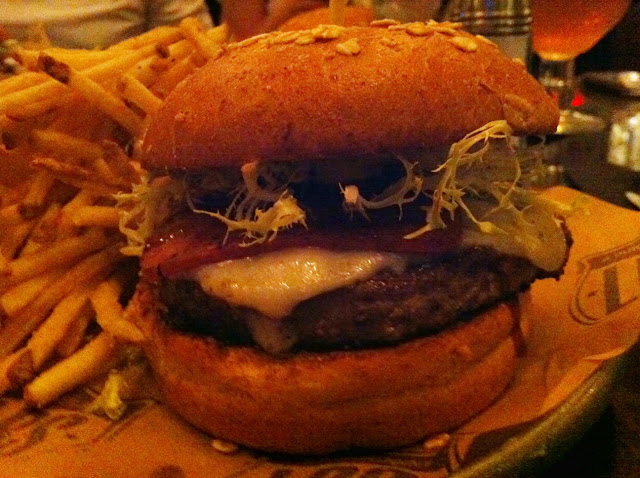 Flyin' Hawaiian at LBS Burger
lbsburger.com
B+
There are lots of Asian burgers around these days, but whenever someone tries to put a Hawaiian twist on our classic American sandwich, it usually involves little more than some teriyaki sauce and a pineapple ring. (And yes, there is pineapple on this bad boy, but it comes in the form of a subtle, sweet chutney on top.) But this burger, thanks to the masterpiece-making kitchen crew at LBS (of Block 16), brings all the flavor without going the cheesy route. (Don't take that literally; there is melted pepperjack on this bitch.) The beef patty also is topped with grilled spam, frisee and chili mayo, and it goes great with onion rings. Now if only somebody would upgrade the Hawaiian pizza, we'd be set.
Posted by brock at 9:33 PM No comments: Links to this post 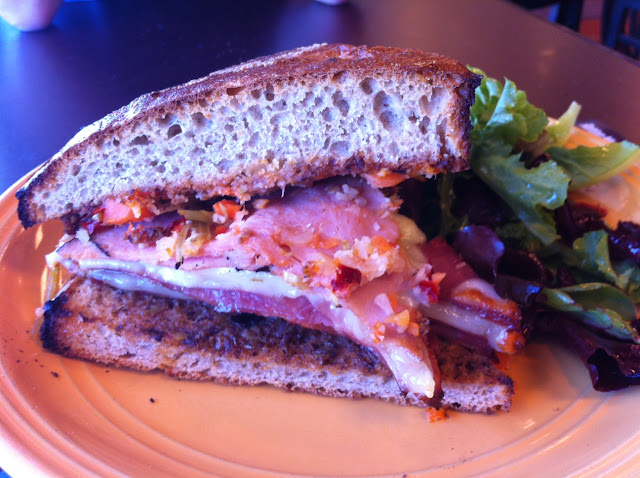 Muffaletta at Bread & Butter
breadandbutterlv.com
A
Our favorite Las Vegas Valley sandwich shops have been in a state of upheaval recently. One of our favorites, Johnny McGuire's, no longer exists. Likewise for Eddie D's Italian deli. The amazing chef and baker Chris Herrin (formerly of Bouchon) has sold his great Bread & Butter bakery/cafe, which all but guarantees menu changes and differences in quality and food focus. But the last time we checked, B&B was still serving the best muffaletta in town. A thick layer of meat and cheese—stripes of ham, salami, mortadella, capicola, Swiss, provolone and mozzarella—becomes something else, greater than the sum of those parts, almost impossibly savory, hearty and rich. Cutting through the indulgence is a slathering of briny olive spread and a bit of vinegary giardiniera. Everything is stacked on the house version of a Sicilian loaf, which is more like buttery deep-dish pizza crust than Italian bread. One bite is filling. Change may continue here and all over town, but hopefully this beauty will be maintained in good faith.

Posted by brock at 9:19 PM No comments: Links to this post 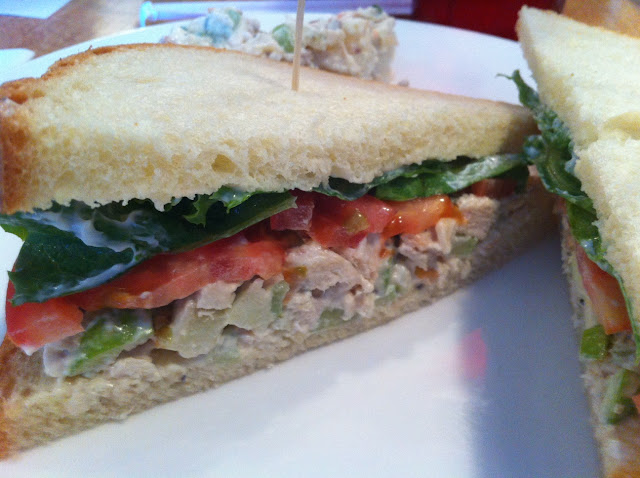 Chicken Waldorf Salad at Fanny's Bistro
fannysbistro.com
B-
People still make chicken waldorf salad? People still eat it? This slightly Italian deli/cafe in Henderson is a cozy, old-fashioned place to eat, so it makes at least a little sense to serve this throwback. And it's tasty: plump white-meat chicken diced into cubes and blended in a creamy, not-too-mayonnaisey mixture with lots of crunchy celery, apples, cashews and onions, slabbed onto fresh panels of bread with lettuce and tomato. (I feel like there were grapes, but I don't see any. Do you?) This feels like a guilty pleasure sandwich, something you won't order very much, but you'll be glad when you do.

Posted by brock at 9:07 PM No comments: Links to this post