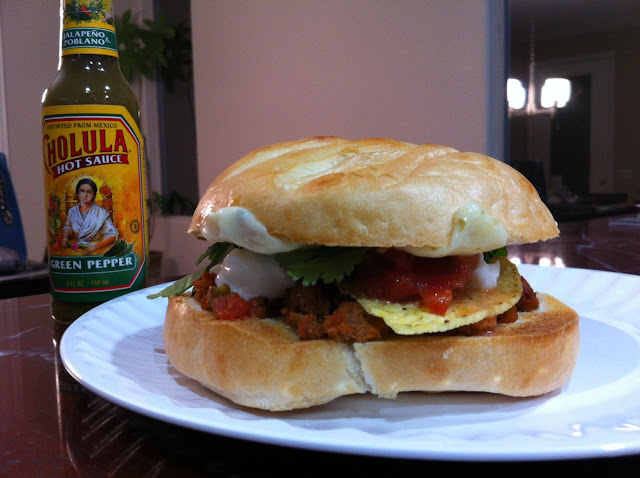 Taco Sandwich
homemade
B+
So I invented this. You've never made this before. No, it's not a torta. It's close, though. I used a traditional torta roll, a fluffier version of a bolillo, one with a really nice, soft chewiness to it. It's a pretty great roll, actually. I toasted it and melted slices of pepper jack cheese on both sides, then layered some ground beef with the traditional gringo taco flavorings. Then on top of the meat, I basically placed a tostada—not tortilla chips but a crunchy taco shell, snapped in half so it'd be flat, then coated with chunky red salsa, fresh cilantro and sour cream. Then, top bun, with top cheese. You bite it and simultaneously get the soft, meaty, spicy goodness of your favorite torta with the crunchy, zesty, cheesy sensation of a taco. Which is why I named it the taco sandwich, and I get to name it, because I invented it.