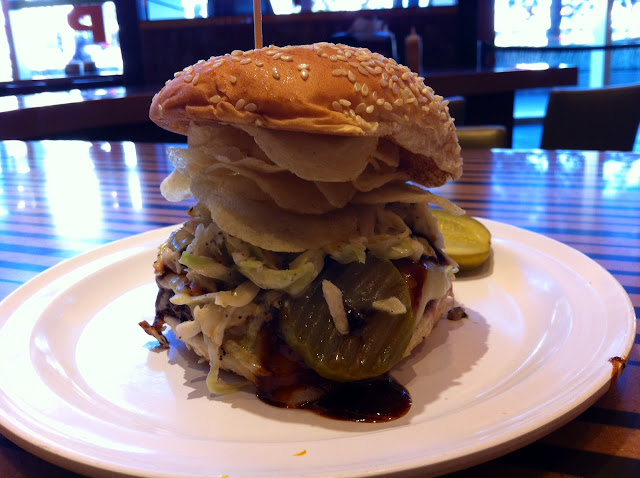 Dallas at Bobby's Burger Palace
bobbysburgerpalace.com
C-
Perhaps it was inevitable. When Bobby Flay expanded his Burger Palace chain to the Las Vegas Strip, we didn't really care, until we went and ate the burgers (and drank the shakes) and goddamnit if we didn't love this place. The fancy burgers were a little less expansive and a little less fancy than the other casino burger shops, and it was glorious. So we kept coming back. But at last, disappointment. We ordered the Dallas, allegedly a spice-crusted patty with coleslaw, jack cheese, barbecue sauce and pickles, and we "crunchified" it by adding potato chips because even though this seems ridiculous, it has worked for us in the past. This was just short of a titanic fail. I don't know what spices were crusted on this burger, but salt was the only thing we could taste. Combine some Lay's and a runny barbecue sauce that was more savory and steak sauce-ish than sweet and tangy, and you have a one-note salt bomb from which there is no escape. Pickles usually make everything better but this just wasn't going to happen. The meat, though cooked medium rare, was bland and mushy on the inside. We'll always have fond memories of Bobby's, but with Shake Shack, Fatburger and Fukuburger within Strip walking distance of this shop, I don't think we'll be able to find a reason to return. It was yum while it lasted.

You fully match our expectation and the selection of our data.dumpster rental near me

Just saying thanks wouldn’t just be enough, for the fantastic fluency in your writing.
dumpster rental near me